We have been suing Telerik Platform for a while now, while their platform is great, going from TFVC to Build to Platform for deploy always involved someone building for their local visual studio, which of course carries the risks of:

So since they have a CLI we decided to try to automate this process, its a bit wired what we came up with because we build at deployment time, but it works.

I setup a git repo for this one with an example solution using the friends app (https://github.com/HostedSolutions/platform-friends-hybrid)

Summary of what we are going to setup with this process

First of all, the project itself. So the Build server in this instance isn’t going to build anything, its just going to package it. so we simply need to add a nuspec file to the project in Visual Studio, example below

Now in this example you will note the files beginning with a “.” i had to add individually. this is because they aren’t picked up by “*.*”

You also need to manually add the packages.config for nuget with a reference to octopack. This will package up the files for you into the nuget format octopus needs.

Finally we need to change the file /scripts/app/settings.js, so that we can token replace the variables, the need to be in a format of #{VaribleName] for octopus, below is an exmaple 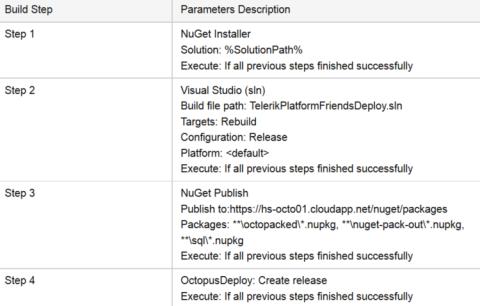 These are very similar to what i outlined in this post (https://beerandserversdontmix.com/2015/09/30/tfs-teamcity-nuget-octopus-somewhere/)

This makes Octopack pass an additional parameter to nuget when it does the packaging, without this it refuses to pickup the files beginning with the “.”

Now this will package up our solution to be built on the deployment server, it wont actually do any building.

I’ve got a few projects that are odd like this, where i end up pushing from Octopus to a remote environment to then onward deploy, its not unusual I think, but still not common. So we ended up creating a machine specific in one of our setups for just running scripts, in my smaller setup we just drop a tentacle on our octopus server though.

I’m using an octopus server with a tentacle on it in this example.

The tricky bit here is that nodejs with AppManager CLI runs out of the User Profile, so What i have done is set the Tentacle on the box to run a a local User Account (if you are in a domain i recommend an AD account), make sure it a local administrator on the box the tentacle is installed on.

Make sure you select the substitute Variable Step Feature.

And you will need to add you JavaScript Settings file to the list once this is enabled.

And for each variable you will probably want to set a different scope per environment.

Then add a step template

And a full step template for octopus here (https://github.com/HostedSolutions/platform-friends-hybrid/blob/master/OctopusStepTemplate.json)

Now i’ll just walk through a few of the things in the powershell and why we are doing things that way.

We expect the previous step to this one to be the Telerik Nuget Package step, if it is not this will fail.

AppBuilder runs from the local user profile, so we need to use the AppData folder path

We modify values in the .abproject file to set things like the version number and also the app name (we prefix dev with “Dev” and Test with “Test” so using the example above where a developer has both dev and test on their phone, that the developers when they are using the app on their phone know which one is which.

Uploads the iOS version
We normally set the Group Access list to a variable, so that it can be varied per environment.

Once deployed to Telerik Platform our version number are in sync with Octopus and Team City as well as our Source control labels. And we end up with seperate apps for Dev,Test , etc. and in the event you are accessing services you can token replace the right scoped variable so that the “Test Mobile App” accesses the “Test Web API” and so on.

And there you have it, TFVC -> TeamCity -> Octopus Deploy -> Telerik Platform